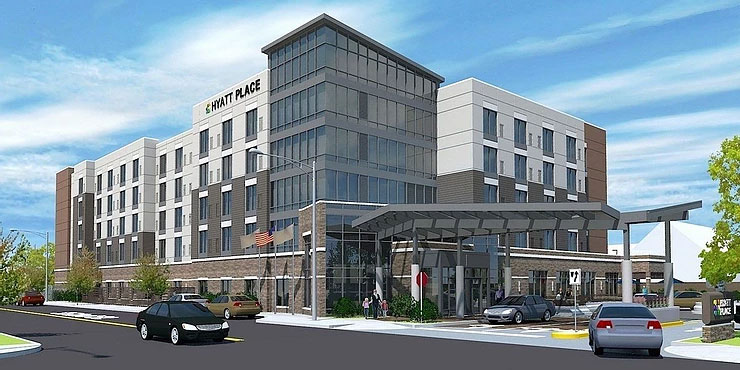 EVANSVILLE, IN (WFIE) – Construction is now underway on a new hotel coming to downtown Evansville. The Hyatt Place Hotel is going up at Southeast Second and Chestnut Streets, where the old Scottish Rite use to be.

Mayor Lloyd Winnecke and the people behind the project broke ground Friday morning on what will be the only Hyatt hotel in the city, and now we are getting a better idea of what the hotel will look like.

The new Hyatt will feature 139 rooms, a bar-lounge, and 24/7 access to food. Guests who stay there will enjoy free breakfast, Wi-Fi, and printing.

The large rooms are designed with plenty of space to work and relax with a 42-inch swivel-mount HD TV. The project will also include new parking, fitness center, outdoor fire pit, and an indoor pool.

The hotel has a modern design that the developer says will look great in the area, providing contrast to the historic homes across the street.

“Right in the corner of historic district and art district, you can’t get a better building here than what we’re going to build here. Hyatt is known for their service and quality, so people will like it. I hope we will attract more stuff to more events actually to Evansville downtown,” says Kinship Hospitality Managing Partner Hemang Shaw.

This hotel is one of several developments in the works in downtown Evansville, and its impact is not going unnoticed. City officials say it is an investment to the tune of $18 million.

It is a day that has been a long time coming. After two years of planning and months of unexpected delays, everyone involved was excited to finally turn that dirt.

“Two years ago, we had a lot of wind here,” says Shaw. “All the renderings were blowing away. Just take it this way. All the turbulence went away, sunshine and going today forward, all going to be good.”

Shah says the beautiful weather is a sign that things are looking up. Unexpected issues with utilities underground delayed construction for months.

Now, they’re excited to make their rendering a reality.

“I love the idea of the scale of this relative to the buildings around it. It’s going to fit in really well, yet it’s going to have this contemporary feeling,” says Downtown Alliance Director Joshua Armstrong. “So you’re going to be across the street, and I’m looking across the street at these beautiful restored historic buildings juxtaposed against this really modern brick glass steel building.”

Armstrong says says the Convention and Visitors Bureau shows high numbers of visitors every month. Visitors that will soon be staying at the Hyatt and sending an economic surge to local shops and restaurants.

Armstrong says it meets downtown’s other needs, too.

“It creates a nice gateway into our central business district that presently didn’t exist,” says Armstrong. “We had a parking lot here for decades. It adds to our tax base, moving from a non-profit ownership of these two parcels to a for-profit ownership, so that’s great for the city. Employment for people in the 4th ward. Jobs that people can walk to are going to be generated by this project.”

Weather permitting, construction should take about 15 months. That means come summer 2019, developers plan to be open for business to welcome more visitors downtown.

“This is a great day for downtown, so this is 139 rooms,” explained Armstrong. “That means those rooms full of people that are going to be consumers in our downtown. They’re going to go into our shops, into our coffee shops, into our restaurants. They’ll be out about on the street, and driving all levels of economic development in our downtown community, Medical School, Convention Center, Main Street, Haynie’s Corner, etc.”

This hotel is one of several developments in the works in downtown Evansville. We are told in the next few weeks we can expect to learn about more construction projects to start this year.

Those projects, totaling well over $100 million.

Article Source:
Previous Post
Groundbreaking held for Hyatt Place hotel
Next Post
This Restaurant Entrepreneur Thinks Outside The Box And Serves Cake In A Jar
Menu